Windows of the Soul

I remember the first time I saw Peter Jackson’s The Two Towers and sat in slack-jawed amazement during the scene where Frodo confronts Gollum about his long-forgotten past as Smeagol. So much of a genuinely affecting performance comes through an actor’s eyes… and here was a CG character emoting in a way I’d never imagined possible! Somehow, the animators had managed to capture Andy Serkis’s phenomenal work and translate it through the computer to play out on the screen.

Because there are several shots in The Price when the Narrator is simply staring at the Black Cat or off into the distance somewhere, I knew that the CG model’s eyes were going to bear the brunt of the audience’s focus (not to mention scrutiny). With that in mind, digital designer and sculptor Ryan Peterson had his work cut out for him.

Again, it may seem like overkill to go into this much detail, but to get the computer to make things “look right,” you have to give it plenty to work with. (Seriously, click on the image above and look closely at all of those sculpted folds in the iris [dilator pupillae] and the intricate veining on the sclera — that is just plain nuts, right??!!) Ryan even made a shell that covers the eye and incorporates the “corneal bulge” shape, which actually helps in the next stage.

When preparing a model for rendering, I can assign certain characteristics to each individual part. In the image above, I gave the skin of the face and the eyeball itself some translucency, so that part of the light in the scene actually passes through the material instead of just bouncing off. It’s not something most of us walk around thinking about, but your brain inherently recognizes the difference between something organic (like skin) and something else (like rubber), and will let you know immediately if something looks “off.” For the scleral covering/corneal bulge pieces, I used a glass-like shader with actual refractive properties, so the image of the iris and pupil behind it are slightly distorted (in real life, the cornea and surrounding liquid do the same thing). An environment map (depicting the scene around the character, like a backyard or a room interior) is also applied to give that glassy surface layer something to reflect, which is what makes it seem wet or moist. (That last reference was specifically for my sister Jen — she absolutely loathes the word “moist.”)

All of these little things really add to the overall impact when you see them together, like this: 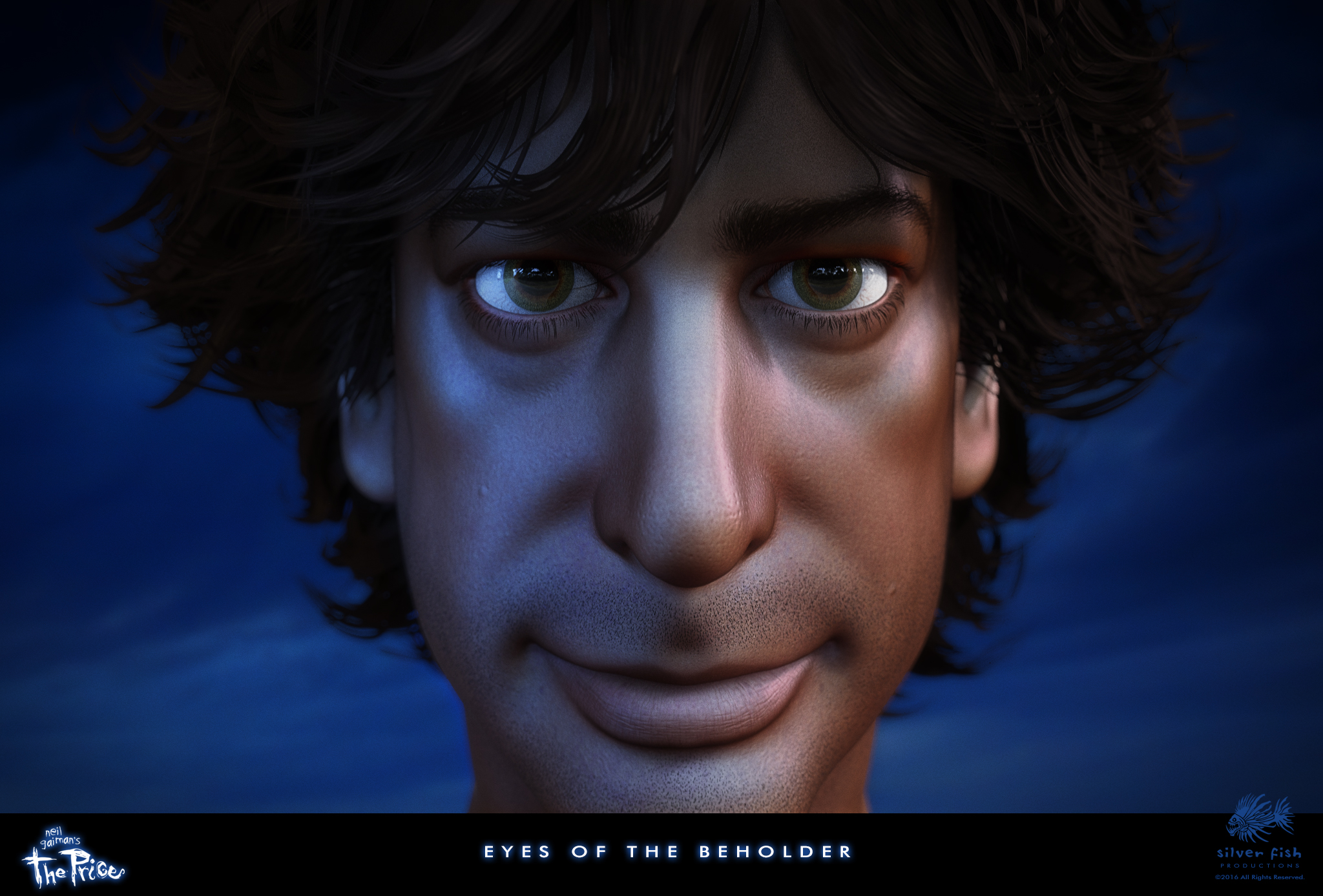 I’ll admit he does appear a wee-bit maniacal (sorry Neil), but those eyes make it seem as though there is someone “in there” (even if he may be a little frayed around the edges).

Well, that’s all for now; I hope you enjoy these “behind-the-scenes” posts — have a great week, everyone!

PS: This whole topic was kind of ironic, as I had my very first visit to the Eye Doc this morning (getting old, I’m afraid…), so here’s a quick shout-out to the whole team at Davis Vision Center (especially that dapper-doc, the one and only Kurt Hepworth)!

10 Responses to Windows of the Soul