The Trouble with Trolls… 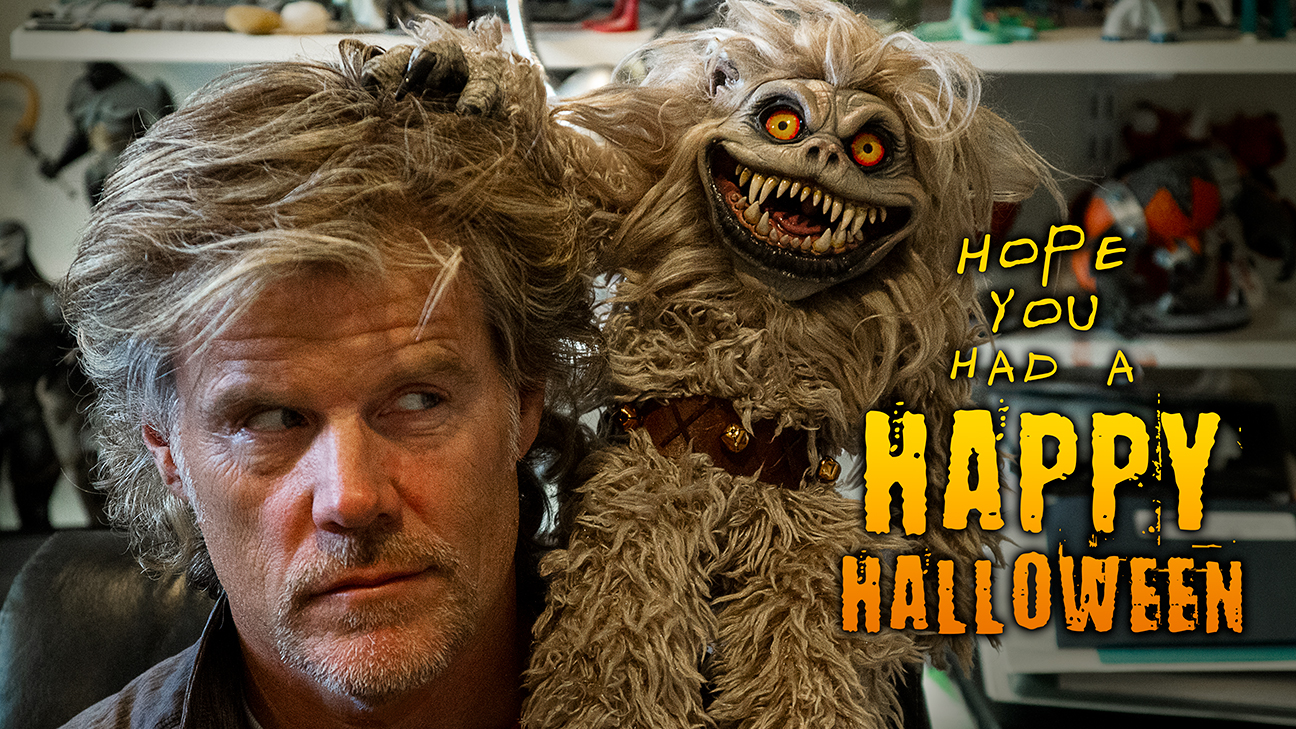 From time to time I take on freelance projects to help keep the lights on, and several have proven to be both extremely challenging as well as genuinely exciting. Given the recent Halloween festivities, I was prompted to share something fun and thought a brief post about making this little guy might be just the thing.

As was mentioned in Videoblog #4: Digital Sculpting and Design, learning to make rubber masks and creatures was one of several rather unique pursuits of my misspent youth. 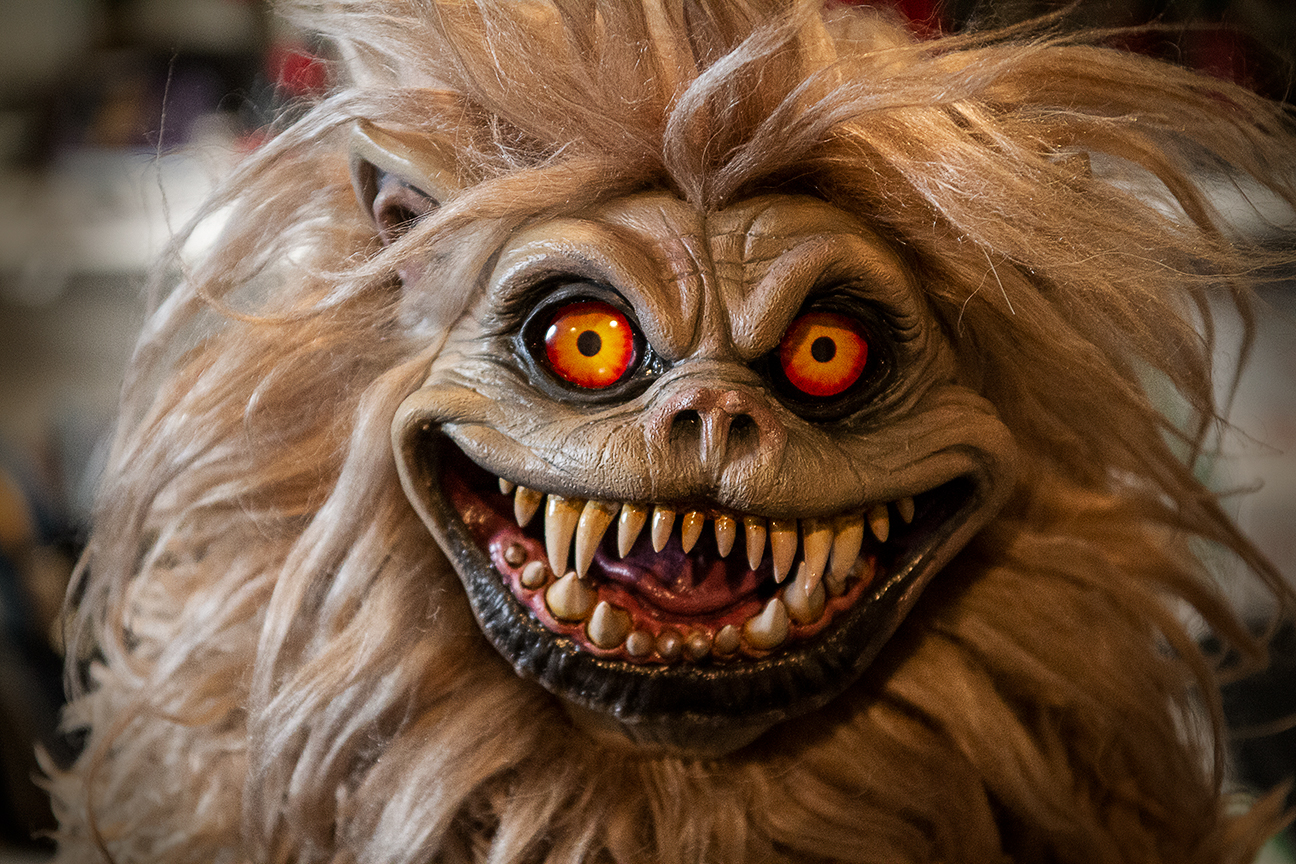 This creepy critter is something I developed for a successful YouTuber (whose upcoming project must remain undisclosed for the moment). It’s essentially a hand puppet created using many common mask/creature production techniques. 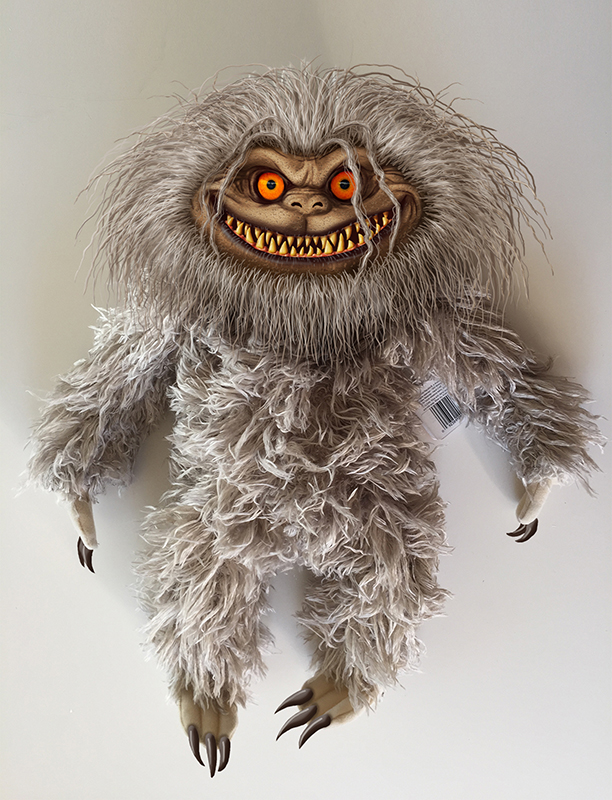 The first thing I did was find an innocent animal plushy with the right type of fur to use as a base for the puppet’s body, then Photoshop-ed a new, ugly mug in place of its decidedly cuter face (adding some wicked black claws for good measure). This part of the process is especially fun, and I gleefully combined elements of both Mogwai and Grinch until an appropriate troll-like visage was achieved. 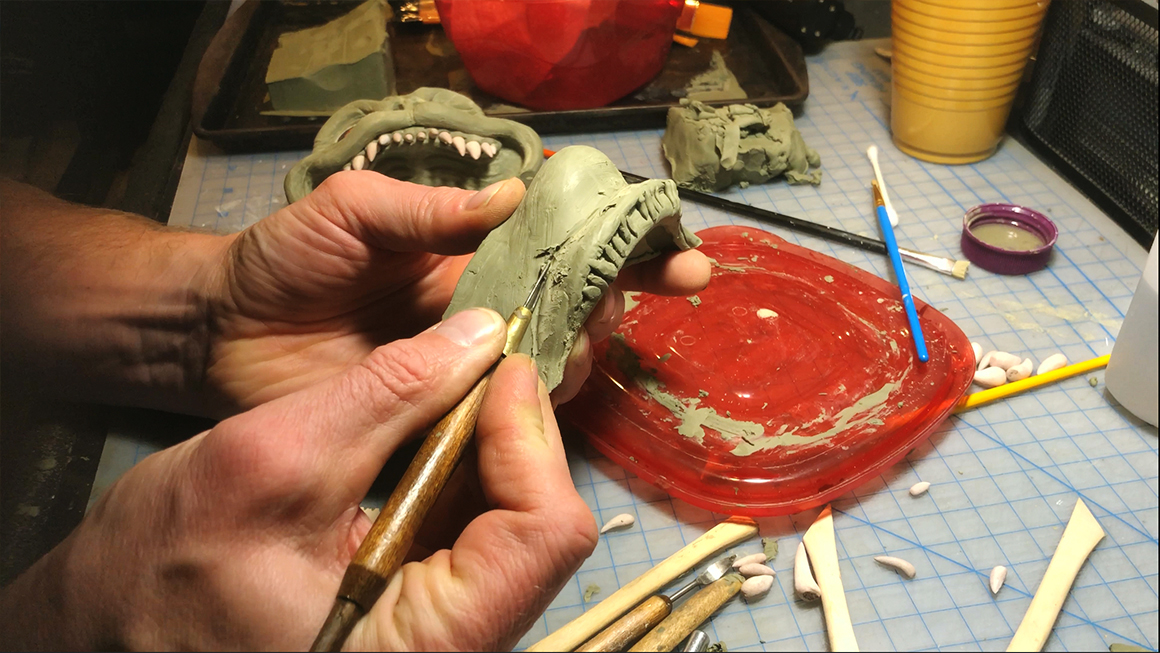 Once the design was sufficiently repulsive, I began to sculpt the charmingly grotesque features in oil-based clay. The basic size was determined by the need to have a hand fit inside to operate the finished creature. A variety of fangs were made from oven-hardening clay, but the eyes took a little more ingenuity. 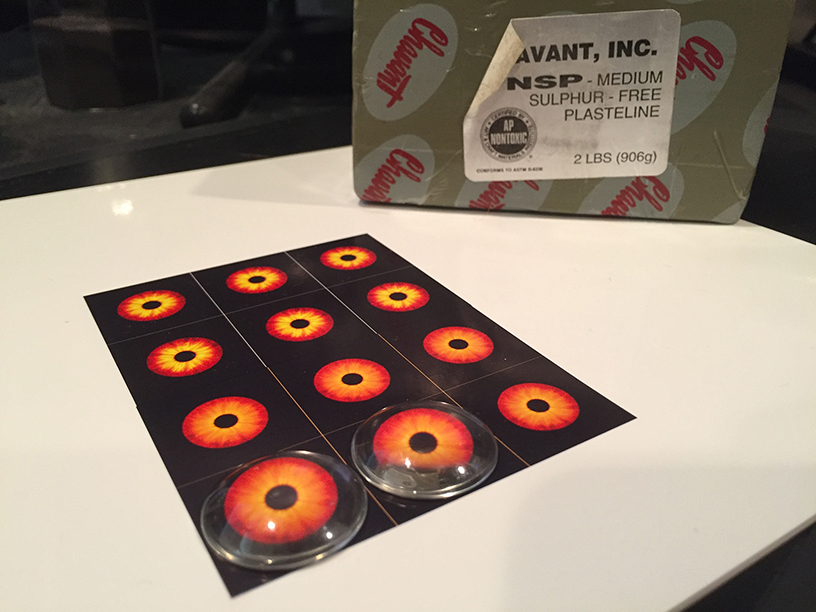 I found some glass forms in a craft store (meant for making those photo/magnet baubles you can display on your fridge), then created the desired iris/pupil/sclera in Photoshop, printed them out and glued them to the back of the glass using clear adhesive. 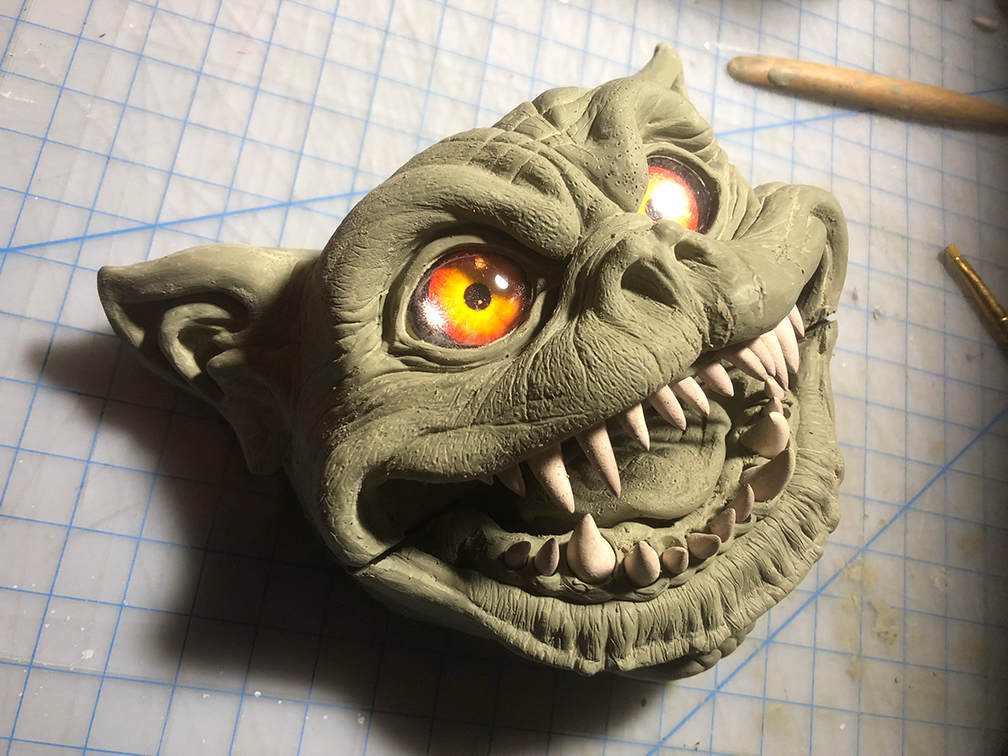 After positioning the eyes and teeth, the skin and all of its detail was sculpted in clay. In the above photo, I’ve started detailing part of the face; you can also see where the lower jaw was separated from the rest of the head to facilitate sculpting the interior of the mouth more easily. 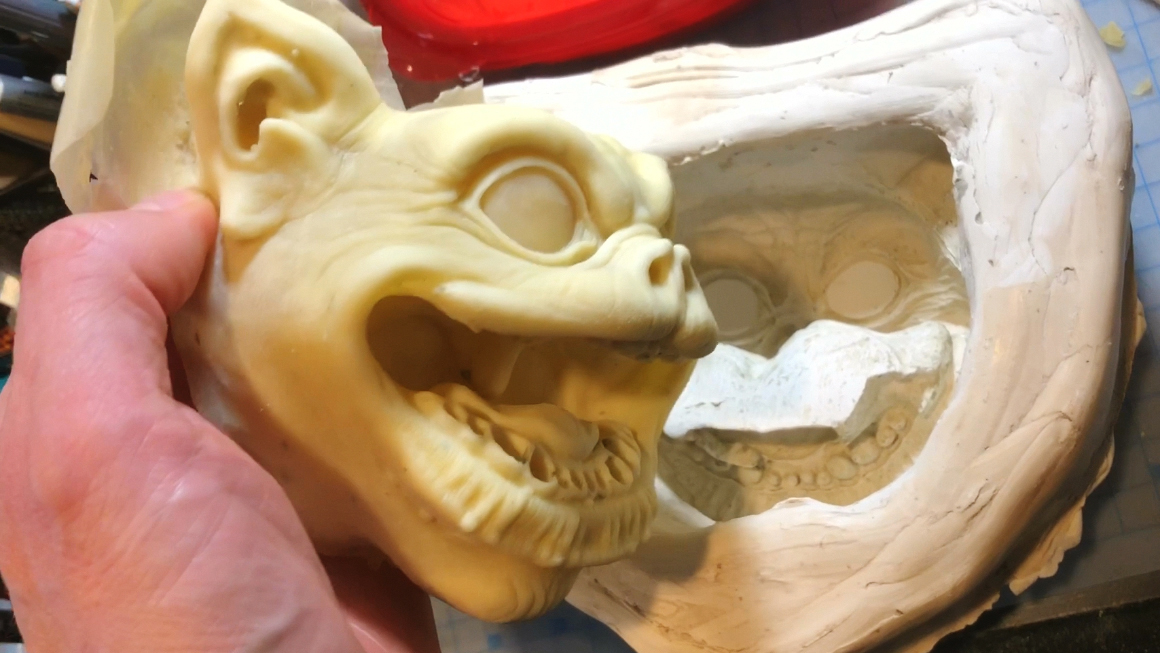 Once the sculpture is finished, a plaster negative mold is made. The clay is removed and several coats of liquid latex are poured in (allowing time to dry between each). When the desired thickness is achieved, the rubber casting is dusted with talcum powder (to keep it from sticking to itself) and carefully peeled from the mold. 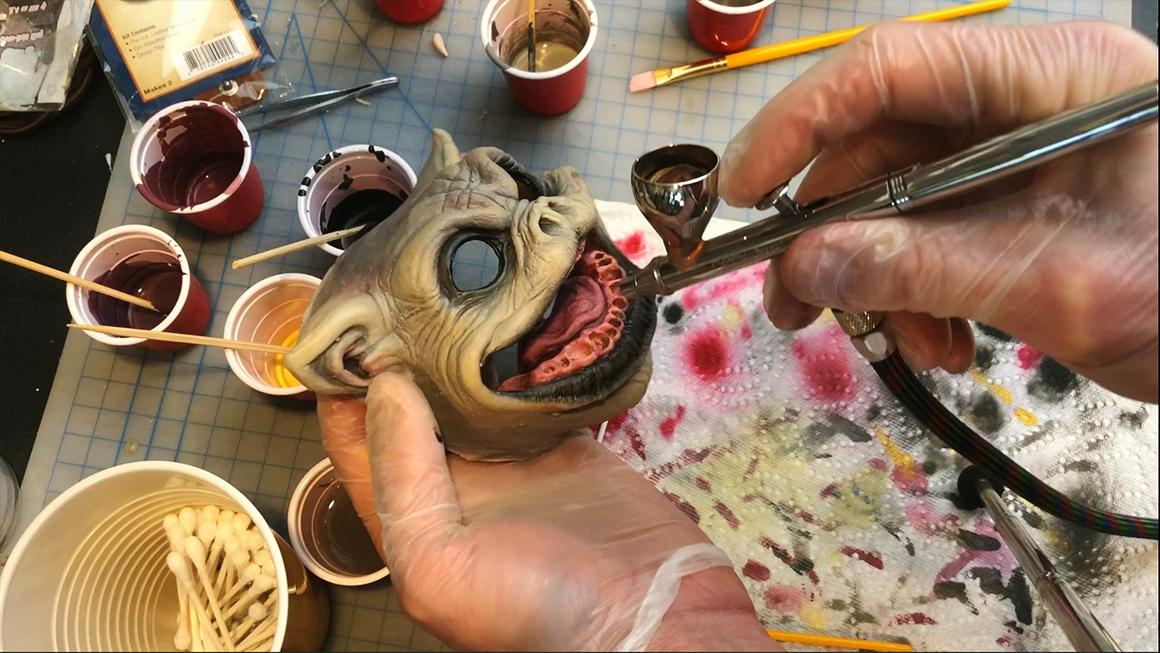 After trimming away the excess rubber from the edges, eye holes and back of the throat, acrylic paint mixed with latex was used to color the face with a series of washes to get the layered tones I wanted. When this part was completed, the eyes and teeth were attached. 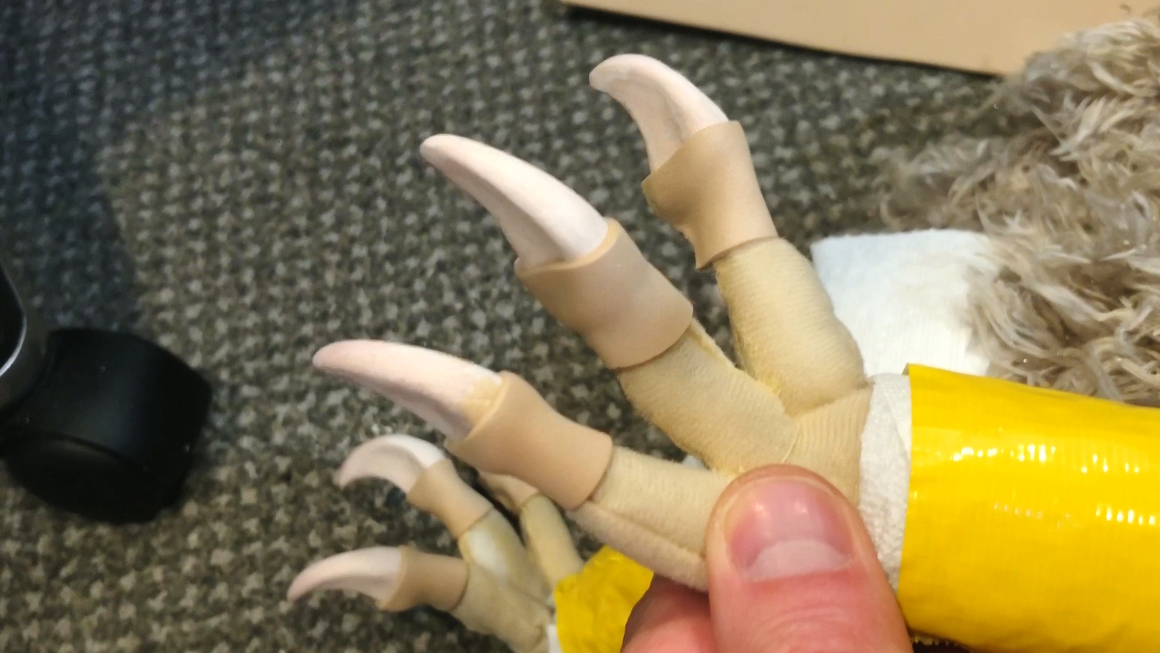 The claws were made from the same material as the teeth. They were attached to wire armatures and placed inside the existing toy’s hands and feet, cutting the single pieces of fabric into three separate digits and gluing everything back together with contact cement (a puppet-maker’s best friend). To help connect the claws better, I wrapped the tips of the fingers and toes with soft foam strips, then used cotton and latex to build up the rough anatomy of the knuckles, palms and soles (a fairly crude technique, but since those areas wouldn’t be seen much, it made sense to save time doing it this way). After a thorough drying, everything was painted. The poseable interior armatures also included a threaded mounting point for rods that could extend out and control each of the limbs. 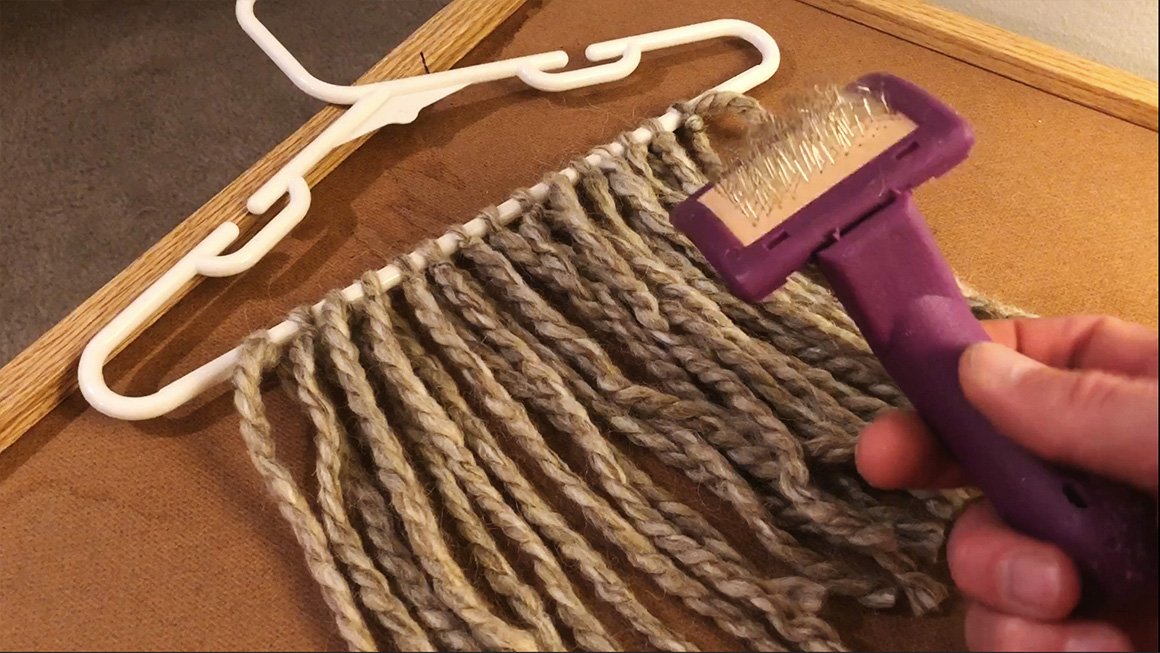 The hair for the head was made from a multicolored yarn brushed-out with a pet grooming tool, and then straightened with an old flat-iron. I glued swatches onto the rubber head in overlapping layers and punched-in small tufts along the hairline using a homemade tool. 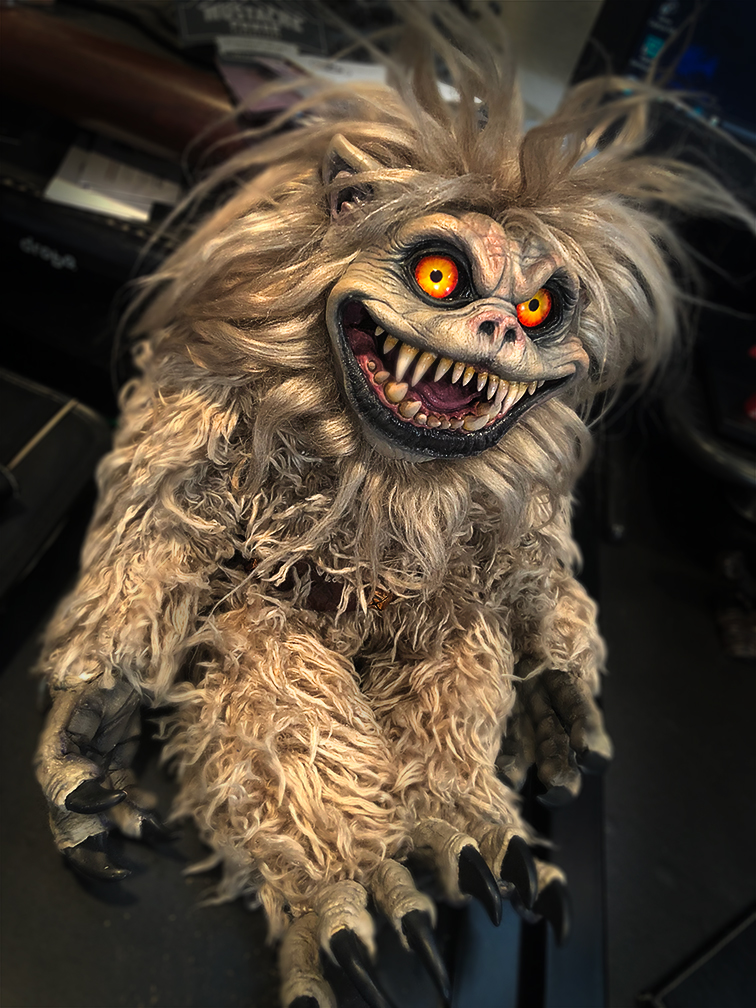 The face was then attached to the body with a lined passage for the operator’s arm that went from its back up into the head. I also created a fabric ‘esophagus’ that allowed him to ‘eat’ objects directly through the mouth. The teeth, gums and tongue were coated to give them a permanent shine, and there you have it … a custom-made troll puppet to haunt your dreams!

Clearly, this project represents an awful lot of work, but also a tremendous amount of fun. Taking a break from the digital world to get my hands covered in clay, paint and glue again — even for a little while — takes me back to where these dark fascinations began; I hope you enjoyed this demented detour!

Director of The Price, and Owner/Creative Director of Silver Fish Creative, LLC.
View all posts by Xtopher →
This entry was posted in Interesting Stuff. Bookmark the permalink.

13 Responses to The Trouble with Trolls…